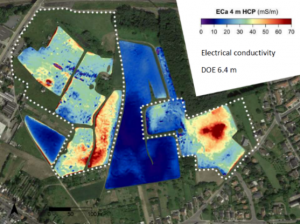 Christin Bobe (ESR1), based in UGent (Belgium), investigated electromagnetic and magnetic methods, as well as corresponding probabilistic data inversion approaches, and applied the methods developed to several landfills and reference materials. Geophysical exploration at the MSG landfill using induction methods (electromagnetics) yielded an accurate prediction of the boundary between construction and demolition (C&D) and MSW. On the other hand, finding a correlation between composition and magnetic susceptibility of waste mixtures is found to be more challenging.

Cristina García López (ESR2), based in RWTH Aachen University (Germany), studies the functioning of an MBT process for the treatment of landfill material from the Halbenrain landfill in Austria and a novel ballistic separation process for the treatment of waste from the Mont-Saint-Guibert landfill in Belgium. A detailed characterisation of the different fractions after separation has been performed and was used for modelling the separation processes.

Bastian Küppers (ESR3), based in Montanuniversität Leoben (Austria), developed a sensor based (NIR) process for the separation of intergrown and surface-defiled materials from ELFM. Based on studies on the effect of surface roughness and moisture, mechanical delabelling, oxide layers, as well as throughput rate and input composition, recipes for sensor-based (NIR) sorting were developed and applied to increase the purity of different fractions obtained from the MBT and ballistic separation processes.

Juan Carlos Hernández Parrodi (ESR4), based in Renewi Belgium (formerly Shanks, Belgium), studied the main characteristics and valorisation possibilities of the fine fractions present in landfills from previous investigations, composing commonly more than 50 wt. % of the landfill content. The fine fractions were obtained from the ballistic separation studied by ESR2 at the Mont-Saint-Guibert landfill in Belgium. They were studied in detail, processed and used to produce the target material fractions by ESR4. A flowsheet for further treatment of the fine fraction was developed and tested using a wide range of mechanical separation technologies. The output fractions generated were characterised and their suitability for use as RDF, substitute for construction aggregates (e.g. construction gravel/sand), soil substitute in construction applications (e.g. dikes and embankments) and for low-aftercare re-landfilling was evaluated.