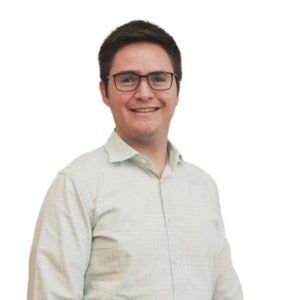 My job is the production of RDF from presently inappropriate waste fractions. These are the fines fractions, which normally contain a relatively high amount of undesired components for the RDF production, i.e. pollutants, high moisture and elevated ash content. This, in most cases, places these fractions into the disposal pathway and discards their potential to recuperate energy and raw materials. My main target is to find a way to treat these fractions in order to minimize the amount to be disposed-off and maximize the amount to be recuperated or transformed into energy. Do you have questions or any great idea to share with me? Please send me an e-mail to juan.carlos.parrodi@renewi.com.

Previous landfill mining investigations have shown that fine fractions typically account for 40-80 wt.% (in raw state) of landfill-mined waste. Additionally, fine fractions have been commonly discarded and directed back into the landfill, since they present defiant characteristics for further treatment. This situation has drastically hindered the economic and environmental feasibility of landfill mining. Therefore, the recovery of material and energy from fine fractions is of critical importance for the successful practicability of landfill mining. Studies on the composition of fine fractions have shown that they are composed of subfractions that if properly separated could be employed to recover ferrous and nonferrous metals and inert (e.g. concrete, bricks, stones and glass) and “soil-like” (e.g. humic substances, cover layer material and weathered rocks) materials. Ferrous and nonferrous metals could be directly sent to the recycling industry, while inert and “soil-like” materials could be used to produce substitute materials for construction aggregates (e.g. construction gravel/sand) and soil in construction applications (e.g. embankments), respectively, following a waste-to-material (WtM) scheme. In addition, materials with high calorific values could also be recovered from fine fractions, such as plastics, textiles, wood, paper and cardboard, with which an alternative fuel (e.g. refuse derived fuel (RDF)) could be produced following a waste-to-energy scheme (WtE). To this end, landfill waste was extracted at the Mont-Saint-Guibert (MSG) landfill in Belgium. The landfill-mined waste was pre-processed with a ballistic separator, which sorted the material into two-dimensional (2D), three-dimensional (3D) and under-screen fractions. The ballistic separation process was carried out in two steps: first with screen-paddles of 200 mm and secondly with screen-paddles of 90 mm, simulating a cascade arrangement. The fine fractions of the MSG case study correspond to the under-screen material <90 mm produced after the second step of the ballistic separation. These fractions were the material mainly studied in the research of ESR4. 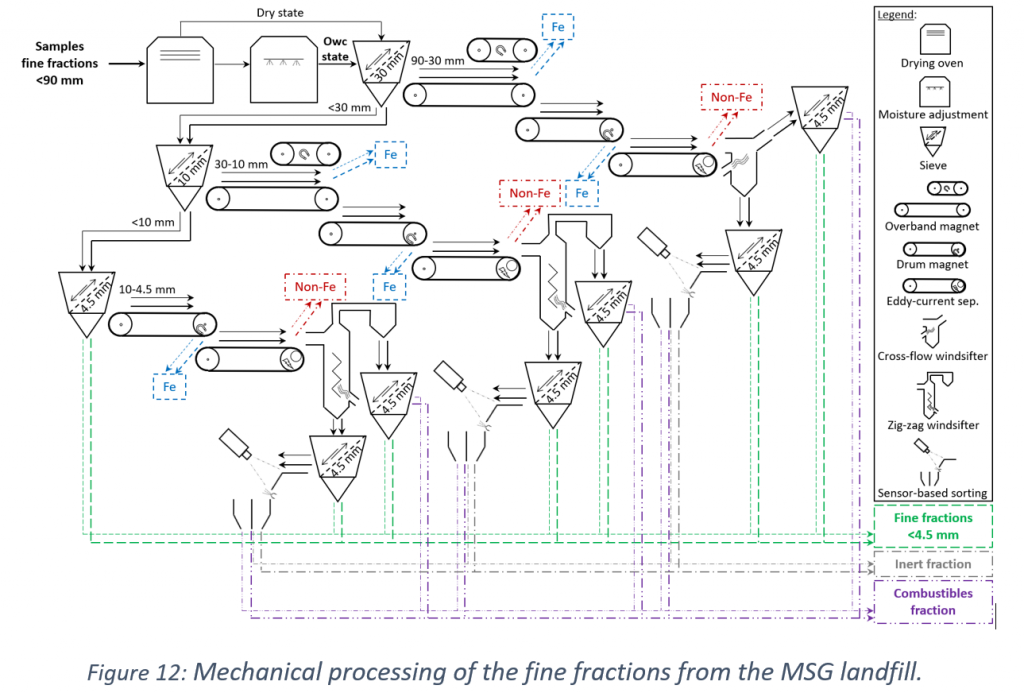 The heavy fractions were processed with near-infrared (NIR) sorting to further sort out combustible materials from them, since these fractions were mainly composed of inert materials and were envisaged to produce a substitute for construction aggregates. In turn, the light fractions were mostly constituted of combustible materials and, hence, sorted combustibles from the inert fractions were added to this fraction for joint valorisation, which was conceived as RDF. The sieved loosened impurities of the light and heavy fractions of the particle size ranges 90-30 mm, 30-10 mm and 10-4.5 mm, and the fine fractions <4.5 mm were mixed to be further processed. The mechanical processing of the fine fractions <4.5 mm was composed of further sieving steps and a surface cleaning process (driven by erosion - surface attrition), since it was suspected that most of the problematic elements and compounds that could hinder the valorisation of these fractions, as a substitute for soil in construction applications, were to be found in particle sizes <0.5 mm and would be adhered to the surface of coarser particle size in the form of surface defilements. 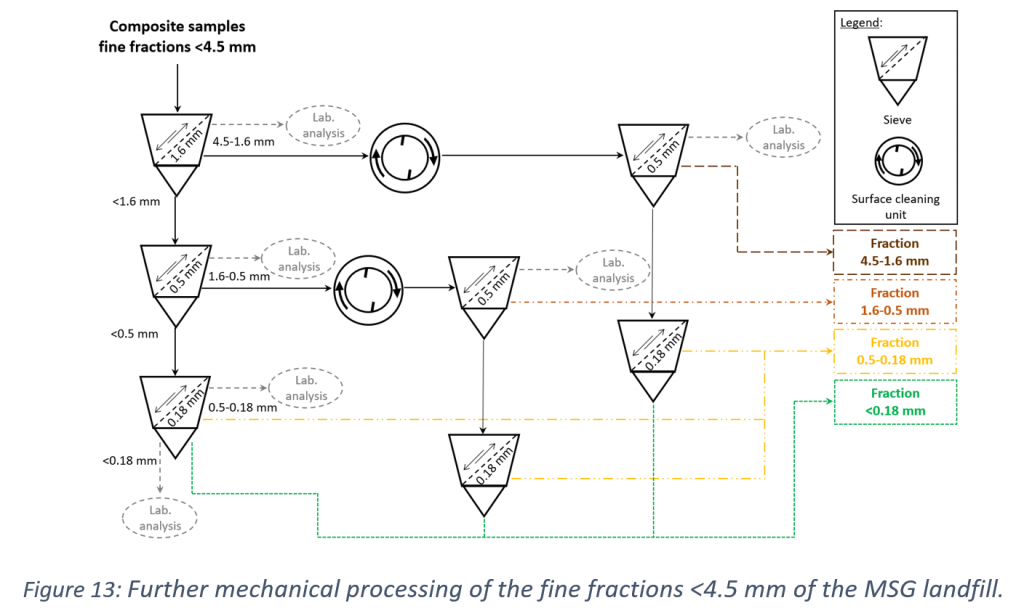 The results of the laboratory analyses of the produced combustible and inert fractions 90-4.5 mm revealed that the quality of these fractions tends to decrease as particle size decreases. This can be attributed to the higher amount of impurities present in these fractions with the reduction in particle size, since impurities were associated with organic and inorganic pollutants. The owc state significantly reduced the amount of emissions in the form of dust and fine-sized materials in the mechanical processing of the fine fractions 90-4.5 mm, as well as the amount of energy required by the drying process. However, the owc state was associated with higher presence of impurities on the output fractions, which decreased the quality of the combustible and inert fractions in some cases. In contrast, no clear tendency regarding the quality of the fine fractions <4.5 mm could be identified according to particle size. The combustible fractions showed suitability to be valorised through thermochemical processes as plasma gasification, as the specifications of the EN 15359:2011 for the production of solid recovered fuels (SRF) could be met.

As there is no overarching legislation for the utilization of the inert fractions for the production of a substitute for construction aggregates, nor for the use of the fine fractions <4.5 mm as a substitute for soil in construction applications in the EU, the valorisation of both fractions depends on the compliance with national and local legislation; which may apply significantly different parameters and limit values as evaluating criteria among member states. In the combustibles fractions, the concentrations of certain heavy metals (i.e. As, Cd, Co, Hg and Pb) could be problematic in some EU countries, while the content of hydrocarbons, Pb and ammonium-N were identified as the main potential pollutants in the inert fractions. Total organic carbon, heavy metals (i.e. Cd, Cu, Hg, Pb and Zn) and leaching concentrations of Ni are regarded as the principal potential problematic parameters of the fine fractions <4.5 mm, depending on the applicable regulation.

Nevertheless, the laboratory results showed that the problematic elements and compounds (i.e. pollutants) present in the fractions <4.5 mm cannot be significantly concentrated in any of the subfractions (i.e. 0.5-0.18 mm and <0.18 mm) by means of particle size classification, and that a simple dry surface cleaning process driven by surface abrasion does not suffice to significantly reduce the concentrations of such pollutants.

Hence, wet-mechanical, chemical or mineralogical methods can be of interest as alternative treatment for the finest particle size ranges (<4.5 mm) of the fine fractions. Moreover, the previously mentioned alternative methods are commonly associated with more complex and expensive processes, which might largely outweigh the potential benefits of processing the fine fractions in landfill mining. Nowadays it seems unlikely that such technologies and the overall concept of landfill mining will be economically feasible, as prices of raw materials and regulations remain to be unsurmountable obstacles for landfill mining. Both the increasing market prices for recuperated materials and the legal framework will set the conditions to justify new waste processing technologies. Therefore, suitable WtM and WtE valorization routes for the recovered fractions from the fine fractions of landfill mining are to be further developed and appropriate overarching regulations need to be created at EU level.