Will we suffocate in our waste?

“Humanity will not perish in an atomic nightmare – it will suffocate in its own waste” said the Nobel Prize winner Niels Bohr. Despite his thoughts that “it is difficult to make predictions, especially about the future”, he could not have been any more right. So are many countries realizing this now. While this has been a global issue for several decades, many have been raising the alarm only recently. For example, as Moscow is drowning under 70 million tons of waste each year which lead to putrid smells and toxic gases inconveniencing the population, the government is now promising to open five waste treatment plants [1].

Some municipalities may have found a viable long-term remedy for the past damage. The city of New York started to develop a park above the world’s largest human made construction, the Fresh Kills landfill [2]. Harvesting methane on site provides enough energy for the heating of 20’000 local homes and the once visible from space landfill will become home for football fields, recreational activities and hiking trails. 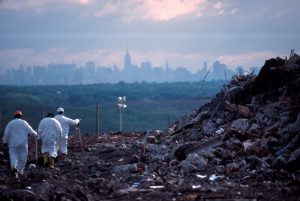 But waste treatment and such large architectural projects have a cost that not all cities can afford. Most landfills are either essentially a large open air bin or a layover before sending the waste off to incineration.

Some countries manage, using incineration, to provide heating to 20% of their population while providing electricity to 1 household out of 8. This is the case of Sweden where there is a shortage in waste in comparison to the capacity of their incineration plants, leading to a waste import from their neighbours [5]. Yet, although appealing, incineration is a process that most environmentalists fight against following toxic emissions. Sweden argues that they have managed to reduce their emissions to an acceptable level, but 5 to 10 years of operation are required for accurate emission measurements. 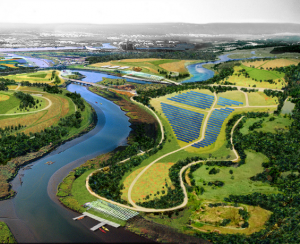 Research is ongoing to aid waste recycling and upcycling. A popular ongoing research concerns gasification, a process that enables to convert fresh and landfilled waste into valuable products. Specifically, the products are eco-friendly inert materials, which can be used for construction purposes, and a mixture of hydrogen and carbon monoxide, called syngas, which can be further transformed into liquid fuels or electric power. However, gasification requires high temperatures, making this process very energy-intensive. Fossil fuels could respond to this demand but would lead to a non-sustainable waste management cycle.

An alternative renewable option is using an unlimited free source of energy: the sun. This means capturing solar energy using concentrated solar thermal systems and delivering it to the gasification process, as described in Figure 3. The overall process, that may be a way to prove the famous physicist wrong, will be depicted in the next blogpost. Stay tuned!