STADLER, one of the partners of the ETN NEW-MINE project, launched a press release on July 13, 2020, in which it highlighted the potential of Enhanced Landfill Mining.

STADLER played an important role in the first work package, dedicated to mechanical processing. Thanks to the STADLER STT6000 Ballistic Separator, the theoretical research on mechanical processing was put to the test in real conditions in the Mont-Saint-Guibert landfill in Belgium where land-filled waste was excavated and processed. The tests showed that a recycling process with a separation in three fractions is possible. This process can be the first step of the mechanical treatment for the recovery of RDF and other recoverables, such as metals and inert materials.

Staff of STADLER accompanied various researchers in their secondments. As a result, the NEW-MINE researchers showed that further mechanical separation of the fine fraction of landfilled waste can produce sand that can be used as an aggregate in the construction sector. The light fraction can also be used in a thermo-valorization process.

The full press release can be found on the website of STADLER. 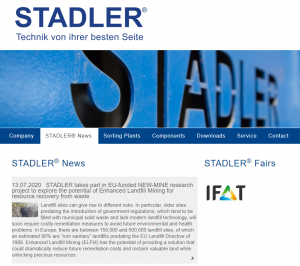