Quite a few of the NEW-MINE researchers and the management team were slightly nervous on Monday February 5. The fourth symposium on Enhanced Landfill Mining was about to kick-off! This symposium was an important milestone in the project. Over 150 researchers from over 15 countries gathered in Mechelen to discuss the state of the art of the research on Enhanced Landfill Mining (ELFM). Afterwards, the consortium reflected on the achievements during the third Network-wide Event. 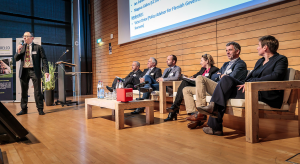 The posters were numerous, the discussions fructuous and the coffee abundant. All ingredients for a great symposium were in place. On the opening day, Peter Tom Jones (General Coordinator EURELCO & ETN NEW-MINE), Stef Denayer (Managing Director i-Cleantech Vlaanderen) and Luc Goeteyn (replacing General Administrator Henni De Baets of OVAM, Flemish Public Waste Agency) welcomed the many participants to the fourth international ELFM-symposium and introduced the four sessions of the symposium. All ESRs actively participated to the symposium and presented their research in a short oral presentation, a poster pitch or a poster presentation. 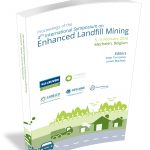 After these two inspiring days, the EU-funded projects of Smart Ground, Cocoon and Rawfill invited the participants to dive deeper into the topic of landfill management, landfill mining policy and data collection during two workshops organized on Wednesday 7 February.

Finally, on Thursday and Friday 8-9 February, the project consortium gathered in Leuven during the third Network-wide Event to reflect on the results of the ELFM-symposium and to look forward towards the coming months. First, all ESRs gave an overview of their progress detailing the state of the art of their research, training, secondments and communication & dissemination activities. Any questions raised by the supervisors and partners were swiftly answered. In the evening, the Q&A session continued in a convivial atmosphere during a delicious dinner in the historical city center of Leuven.

On the last day of an intense week, the project Technical Steering Committee and the Supervisory Board gathered to review the progress. They concluded that the project is on track and progressing steadily. Meanwhile, the ESRs received several trainings by Renewi, namely on Six Sigma as a management strategy, and on landfill management safety issues.

During the next meeting, a thorough evaluation will be conducted by the European Commission during the midterm evaluation.