ESR in the picture: Cristina Garcia Lopez at RWTH Aachen

On the occasion of highlighting the innovative research of the NEW-MINE project, one of our ESRs, Cristina, was put in the spotlight at RWTH Aachen.

In a long and frequently ‘liked’ facebook post, Cristina was able to explain her research about re-excavating old landfills in order to convert a portion of the dumped waste into products, or to use the combustible portion for energy production. A few days later, the new-mine project was featured in a short article in the student newspaper who was interested by the vision of the research and innovation program funded under the Horizon 2020 programme of the European Union: “To be able to use garbage of past generations economically”.

Below we present a short translation of both articles (or look up the FB-post: www.facebook.com/RWTHAachenUniversity ; scroll to October 20, 16:15).

“To use the garbage of past generations economically sounds like a dream. However, exactly this is the goal of the NEW MINE project, which is funded by the Horizon 2020 research and innovation program of the European Union. “There are 150.000 to 500.000 landfills in the European Union, partly operating, and partly closed,“ says Cristina Garcia Lopez, PhD student and member of the Institute of Processing and Recycling (I.A.R.) of the RWTH Aachen University. “Many of the European landfills were laid out before 1999. At this time, there was no EU-wide directive on “ordered” waste disposal. These landfills could theoretically contain everything. To be sure, you have to have a look inside. ”

NEW MINE is focused in particular on the domestic waste dumps. The aim is to excavate these landfill sites and to convert a portion of the dumped landfill into products or to use the combustible portion for energy production. Task of the I.A.R. is among other things to assess the potential of landfills as a deposit of secondary raw materials and to process the landfill material mechanically.

Recently, the I.A.R. opened and investigated a landfill in the Belgian town of Mont-Saint-Guibert. In order to be able to estimate in advance what is found underneath, a so-called EMI sensor (Electro Megnetic Induction) was drawn over the surface of the landfill in circular movements. The delivered data showed that there was “valuable” rubbish inside – the excavator could get started. “Below an about one meter thick layer of clay we first found rubble and the like,” recalls Cristina. “As expected, the household waste, as well as well-combustible plastic, is the best for energy generation.” An important part of this excavation was to test a machine for the separation of the excavated material. Over conveyor belts and grids, the excavation material was pushed back and forth until the stones, wood, plastic and other components had separated. “The separation process went as planned,” says Cristina. “We are very satisfied with the results.”

Learn more about NEW MINE: 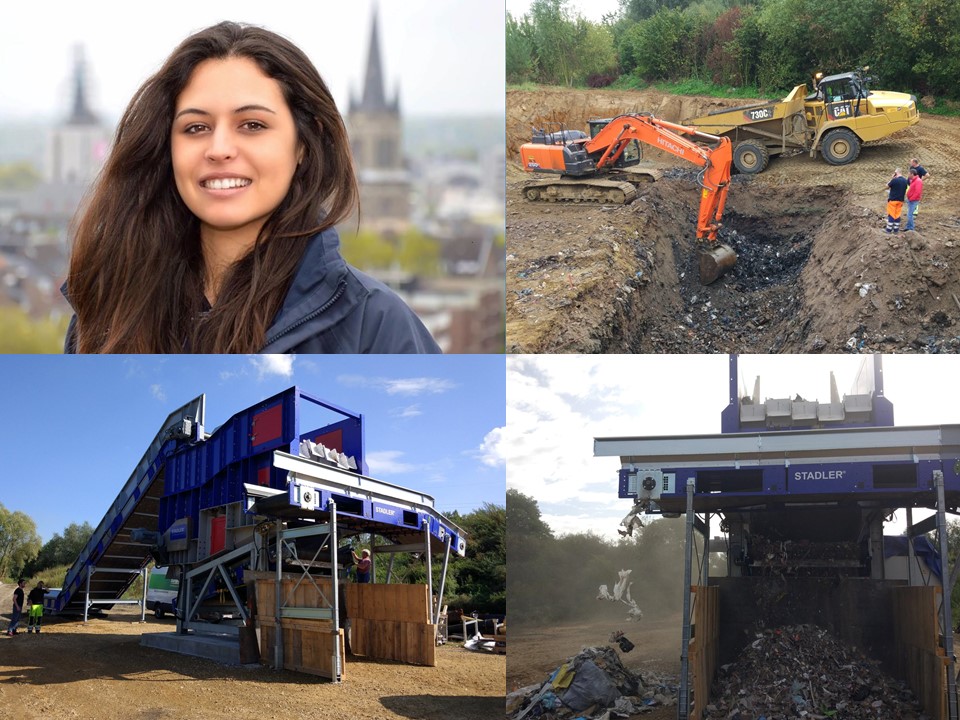 ESR Cristina Garcia Lopez is featured in the pictures of the facebook post of RWTH Aachen, together with her research environment: the landfill and the ballistic separator