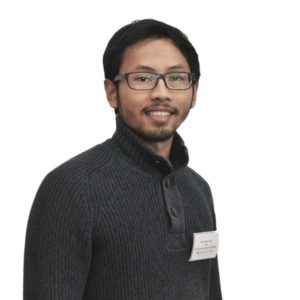 The general objective of my work is to develop a novel solution, based on the plasma gasification technology, to convert RDF from landfills into valuable energy forms with reduced gas emission and minimal solid waste. Verification of this novel process will be done by experimental tests using both a lab-scale furnace at KTH´s laboratory and a pilot plant at ScanArc. Do you have further questions? Please kindly send me an email at zaini@kth.se.

Urban mining through excavation and processing of waste from landfill sites has been considered as a promising option to supply back material and energy resources to the production cycle; thus, enabling a closed-loop cycle in the latest circular economy definition. Apart from the material and energy sources potential, the need for land redevelopment and pollution mitigation are the other motivations of excavation and remediation of landfill sites. Thus, the Enhanced Landfill Mining (ELFM) concept emerges to overcome these challenges. This can be achieved by implementing integrated valorization of landfill waste, which may include materials recovery through advanced sorting and separation processes of different waste streams as well as the conversion of non-recyclable materials into gaseous fuels and vitrified slags through high-temperature gasification processes.

Gasification has been preferred over other thermochemical technologies owing to the higher material decomposition and chemical energy conversion. Furthermore, gasification is believed as a promising technology to produce a H2-rich gas, especially when steam is used as the gasification agent. Hydrogen (H2) has been considered as one of the potential energy carriers of the future. It is gaining a lot of interest due to its flexibility, as it can be used directly as a fuel in fuel cells, internal combustion engines, and gas turbines, or as a medium for chemical energy storage. Moreover, H2 is regarded as the most efficient and environmentally friendly energy carrier due to its high gravimetric energy storage density and ability to produce no harmful emissions during its conversion to electricity. Nowadays, almost 99% of H2 production still relies on the use of non-renewable sources such as natural gas (76%) and coal (23%). Hence, new sustainable processes based on renewable sources and waste for H2 production are highly demanded. The conversion of landfill waste into H2 may play a significant role in achieving a circular economy as it is one of the most widely used chemicals on Earth.

Considering the challenges above, this PhD has been performed to evaluate the application of high-temperature gasification for converting excavated landfill waste into H2-rich syngas.

The fundamental investigations mainly involved the kinetic study of char-steam reactions. This study was done by using a thermogravimetry analyser (TGA) to obtain the mass degradation behaviour of char samples during steam gasification. Approximately 50 mg of char derived from landfill RDF was used for each TGA test. The fuel properties, inorganic element content, and porosity of raw and char samples were analysed. The kinetics behaviour of the char was then evaluated by using previously available curve fitting methods.

The results in studies II, III, and IV were obtained through the gasification test in lab-scale tube reactors. In these tests, approximately 4 – 10 g of samples were used to perform the gasification at various atmospheres. The produced syngas was collected and analysed by using a Micro Gas Chromatography (Micro-GC). The tar samples were collected by using Solid Phase Adsorption (SPA) method and analysed according to internationally approved methods.

This study aims to investigate the performance of landfill waste in a plasma gasification process by simulating the process in the ASPEN Plus software package. The investigation is focused on the energy recovery potential of landfill waste based on the composition and heating value of syngas, and cold gas efficiency (CGE). The plasma gasification system consists of a shaft gasifier and a separate tar cracking reactor where high-temperature plasma is used for conversion of tar compounds considered in the model. The mass and energy balance of the system was determined to better understand the system. 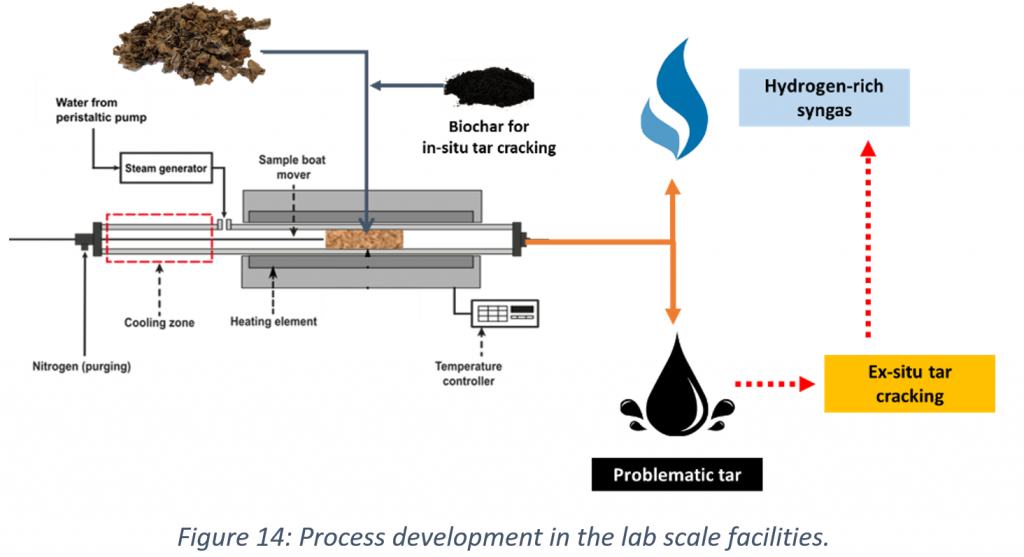 The focus of this study is the characterization of the reactivity and kinetics of the char-steam reaction during the gasification of RDF from landfill waste. The results implied that the char reactivity was mainly affected by the inorganic elements contained in the char. Char from fine fraction of landfill waste had the highest value of inorganic index (42 – 52 % higher than the other chars) which is defined as the amount of ash, multiplied by the ratio of catalytic inorganic elements (K, Ca, Na, Mg, and Fe) over the inhibitor elements (Si, Al, and Cl). As a result, the chars from the fine fraction of landfill waste had the highest reactivity than other chars which was showed by a 24 – 68 % higher value of reactivity average. Furthermore, the char conversion in the case of landfill waste fraction exhibited a different character as compared to that of RDF from fresh MSW, in which the reactivity of the char decreased significantly at the higher char conversion levels owing to the high Si-dominated ash amount. The results from the gasification test of the landfill waste char demonstrated the significance of the process parameters during waste sorting processes on the thermal behaviour of the waste fuel, especially during the gasification. For example, the results of the char reactivity above suggest that the use of smaller sieve opening sizes for landfill waste sorting processes (e.g. during a ballistic separation process or other mechanical treatments) may produce waste fuel with a higher reactivity during gasification due to the higher ratio of catalytic metal elements.

This study aims to investigate the primary fragmentation behaviour of solid waste-derived fuel pellets during the devolatilization stage of gasification. The waste composition and pelletisation operating parameters of the fuel pellets were varied to obtained pellets with different fuel compositions and mechanical strengths. Mixtures of pure cardboard and plastics (HDPE) with different blending ratios were used to represent the fuel pellets. The devolatilization tests were performed under nitrogen atmosphere at temperature ranged between 500 – 700 °C. The number and particle size of the fragmented particles were then analysed after the tests. The results show that the degree of the pellet fragmentation is mainly determined by the proximate content of the pellet. As indicated by high plastics-content pellets, higher amount of volatile matter will increase the tendency for pellets to break at lower temperatures and shorter residence times during devolatilization. Hence, pellets with higher content of plastics have a lower structural strength during gasification that might cause problems such as low permeability of the gas in the large-scale reactor.

This study evaluates the performance of a two-stage high-temperature gasifier, which consists of a shaft furnace and a plasma tar cracking chamber. The results show that the gasification of landfill waste was able to produce a syngas with a calorific value of 4.66 MJ/Nm3 while improving syngas yield by attaining a higher content of hydrogen. Thus, the plasma tar cracking of tar compounds can achieve a clean syngas and improve syngas yield. It is found that the gasification of such high-ash landfill waste requires a higher amount of gasifying agent which indicated by a higher Equivalence Ratio (ER) than other typical biomass gasification processes. The parameter study on effect of (ER) shows that syngas has higher heating value and Cold Gas Efficiency (CGE) at lower ER. On the other hand, preheated air can help recover energy from the system while lowering the ER required for the char gasification process to meet the heat demand from partial combustion. The findings implied that landfill waste has energy potential by using a suitable treatment process such as the investigated high-temperature gasification system.

In this study, the potential of biomass or biochar addition during steam co-gasification of RDF obtained from excavated landfill waste to improve its gasification performance is investigated, especially with respect to the H2 yield. The results demonstrate that in the case of co-gasification using biomass, the H2 concentration in syngas increases with an increasing biomass content. However, no clear synergetic effect is observed in terms of H2 production. The results also show that adding biochar results in a higher H2 yield and H2/CO ratio compared to adding biomass. The H2 yield increases non-linearly with the biochar content in the fuel which indicates a significant synergetic effect occurring during co-gasification. The synergetic effect is mainly caused by the promotion of the water-gas-shift reaction and the tar cracking process over biochar. Overall, both biomass and biochar could improve the efficiency of landfill waste gasification as indicated by the higher values of the energy yield ratio (EY). Further, it can be concluded that the addition of biochar to the gasification of RDF-landfill waste has better effects than that of biomass addition with respect to the H2 yield and EY, especially at the higher temperature of 1000 °C. However, the tar reduction under these conditions is less pronounced. Additions of biomass cope better with a tar reduction at high temperatures.

The results from this work demonstrated the significance of the process parameters during waste sorting processes on the thermal behaviour of the waste fuel and its gasification products. Overall, this work has built up the ground for future investigations and developments of gasification process to recover fuels from landfill waste in the form of H2-rich syngas.