Hello everyone! My scope of work? Pyrolysis of RDF generated from landfills; and more precisely – exploring the possibility of producing valuable energy and materials from excavated landfill waste through the pyrolysis process. The keystone is to gain knowledge of the products formation during the process, such as pyro- vapours and solid residue, with a special emphasis on their further use. Experiments will be held by using the lab-scale furnace at KTH first and the pilot plant at ScanArc afterwards. This will give insight in the suitability of recovering energy and materials from RDF.

Any questions, ideas, comments? Please do not hesitate to contact me.

Unquestionably, the world is facing the challenge of transiting to resource and energy efficiency technologies based on a circular economy approach. Simultaneously, the need to secure more land due to progressing urbanisation grows worldwide, arising the query about the possible land reclamation through, for instance, landfill mining.

The landfill mining concept was introduced in the early 50s but flourished in the 90s when it was primarily used for aforementioned land reclamation. However, the concept did not include other ways of excavated material valorisation than partial and basic recycling and then incineration. Since waste incineration is not covered by a greater objective of the circular economy, the new concept was developed – so-called Enhanced Landfill Mining (ELFM), addressing the need for the extended valorisation of excavated wastes to the form of either energy or materials, while following rigorous ecological and social criteria.

A few studies on excavated wastes valorisation have been performed hitherto. (Bosmans et al., 2013) indicated plasma technology as a promising way of producing high-quality syngas combined with vitrified material which can be used as high-end products, e.g., bricks. Indeed, tests on plasma gasification of RDF from excavated wastes resulted in syngas with promising characteristics; however, a valuable vitrified material was not obtained (Agon et al., 2016). For this reason, the attention has been transferred to pyrolysis, as a way of obtaining high-quality products at lower temperatures and in a small-scale. However, only two studies on excavated material pyrolysis can be found in the available literature (Bosmans et al., 2014; Breyer et al., 2017). Therefore, there is a need for more research within the topic (Canopoli et al., 2018).

Given the above knowledge gap, this PhD concept was developed to evaluate the possibility of obtaining valuable products from the pyrolysis of excavated waste. Due to the composition of the material, the H2-rich pyrogas is the primary concern of the research.

The main objective of the research is to find the solution to improve pyrogas quality by subjecting it to catalytic cracking.

Stages of the study:

1. Determination of feedstock pyrolysis characteristics.
2. A comprehensive study on the excavated wastes pyrolysis.
3. An experimental study on catalytic cracking of pyrovapours to improve syngas quality.

Feedstock: The feedstock used within the study is the 90-200 mm fraction of the material from the excavation of the landfill in Mont-Saint-Guibert, Belgium.

The first stage of study: The experimental campaign started with a thermogravimetric analysis of feedstock and its fractions, to initially choose the process temperature for the subsequent studies. Subsequently, Py-GC/MS analysis for feedstock fractions was performed, giving an insight into the fractions composition and directly influencing the catalyst type chosen for the third stage of the study.

The second stage of study: The second stage of the study was based on the lab-scale pyrolysis-tests at six temperatures (400°C, 450°C, 500°C, 550°C, 600°C, 700°C). The study resulted in a complex characterisation of the process products, including their yields and composition. Moreover, C, H, S, and Cl speciation during the process were investigated.

The third stage of study: The catalytic cracking of pyrovapours was the subject of the third stage of the research. The catalyst with nickel and iron as metals and alumina oxide as support were used within the study. Two catalysts (Ni-Al2O3 and Fe-Al2O3) were prepared by a wet impregnation method, and the third one (Ni-Al2O3) was prepared by a simplified sol-gel method. The raw catalysts were characterised using SEM, XRD, BET, and TPR (temperature programmed reduction) techniques. The tests were performed in a two-stage lab-scale reactor for one fixed pyrolysis temperature (600°C) and three temperatures for the catalytic bed in the range of 600-800°C. The tests included a complex characterisation of obtained products, including their yields, composition, and composition of the carbon deposition on the catalysts. 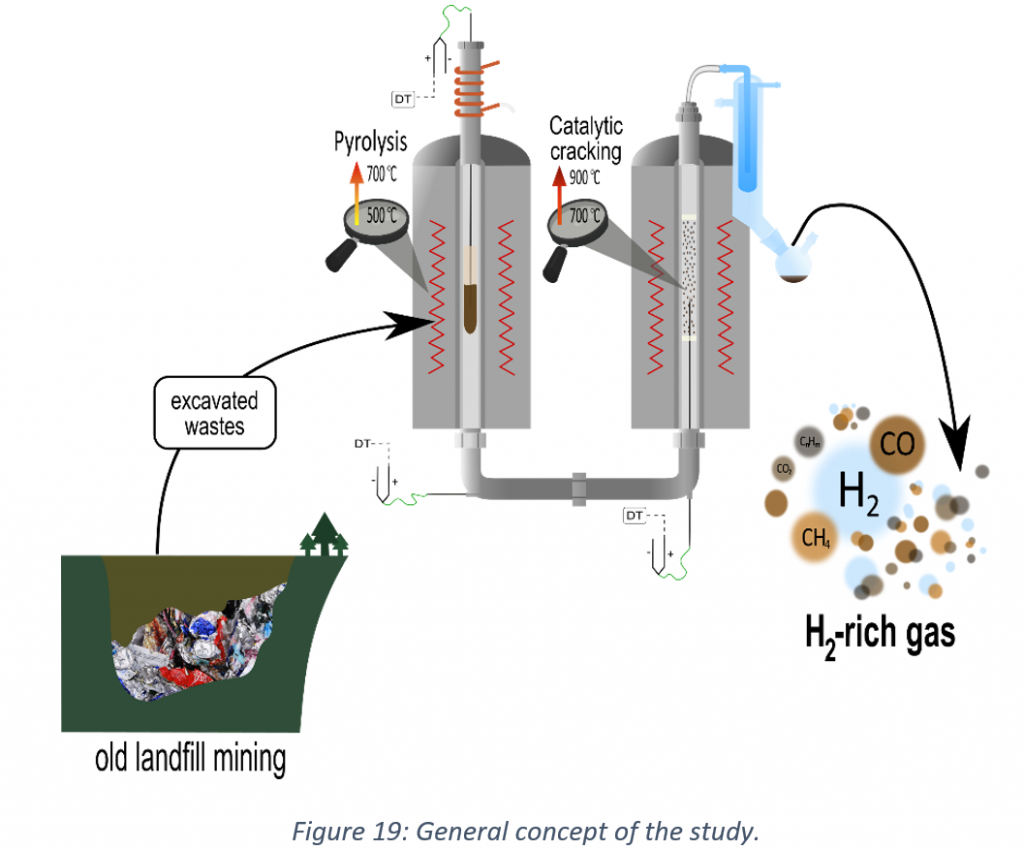 The first stage of the study: The study started with the thermogravimetric analysis (TGA). TGA results show that the TG profile of the analysed feedstock is a function of TG profiles of its components. Therefore, it can be concluded that the interactions between the fractions did not change essential thermal behaviour patterns of the individual fractions. Moreover, on the basis of the TG analysis, the temperature range of pyrolysis for the second stage of the study was chosen (400-700°C).

Subsequently, each fraction of the feedstock was analysed using Py-GC/MS. The Py-GC/MS analysis resulted in detecting over 100 compounds in the pyrovapours, including those potentially harmful for catalysts, causing their poisoning, which influenced the type of catalyst chosen for the third stage of the study. The Py-GC/MS study also allowed the determination of the composition of the fractions (e.g., that PS dominates in the so-called ‘3D plastic’ fraction).

The second stage of the study: The second stage of the study included lab-scale tests of the feedstock pyrolysis at six temperatures (400°C, 450°C, 500°C, 550°C, 600°C, 700°C). The study showed fluctuations of the yields of condensable and non-condensable compounds, which can be attributed to the high degradation degree of the plastics found in the excavated wastes, which changed their thermal behaviour in comparison to not-excavated plastic wastes.

The composition of the condensables changed with the temperature – at lower temperatures, aromatic compounds dominated, whereas at temperatures higher than 500°C – the dominating compounds belonged to the aliphatic group (mainly olefins). Olefins are considered to be one of the most reactive hydrocarbons in catalytic cracking; therefore, their wide presence in the condensables constitutes a promising input for the process. However, relatively high content of H2S (in the range of 0.5-2.5 vol.%) was observed in the non-condensables, which poses a risk of the catalyst poisoning within the third stage of the study.

Based on the study, 600°C was chosen as the optimal pyrolysis temperature within the third stage of the study.

The third stage of the study: The third experimental campaign is on-going; therefore, no conclusions can be drawn yet.

The main objective of the PhD research is to improve pyrogas quality by subjecting it to catalytic cracking. Hitherto, the two first stages of the study showed that the excavated material follows different thermal degradation behaviour in comparison to fresh waste, which can be attributed to its high degradation degree. A few potential risks for a catalytic cracking process were detected as well, from which the greatest one is the presence of sulphur compounds in pyrovapours. However, the results of the second study show the promising characteristics of condensables, which have the potential to be cracked into a high-quality gas.

The research is still on-going. However, solid ground has already been built up for further investigations of excavated materials pyrolysis, by providing the data on the feedstock performance during the process as well as the process product properties. To the best of my knowledge, this is the first study on excavated waste pyrolysis with a complex characterisation of the process products.