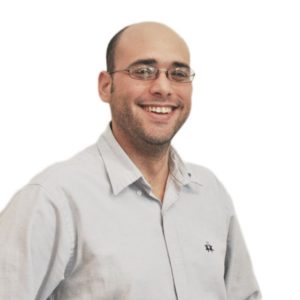 My main objective is conditioning the incineration products not just those produced by the WP2 but also those produced in the traditional household waste incineration plants (bottom and fly ash). In order to achieve this goal, I must develop a new pyrometallurgical proceeding for maximizing metal recovery and simultaneously generation an optimized precursor slag for geopolymers and glass ceramic production in ESR 10, 11 and 12. Explore and model thermo-physical properties of original slag along with the optimization of the modified cleaned slag properties will allow the rest of WP3 to create valuable product with 100% of waste.

From the beginning of the development of human settlements and the accumulation of residues discarded by the inhabitants of such communities, certain places, known today as landfills, have been created for the disposal of waste. When waste is landfilled, several degradation processes take place during long periods with negative environmental implications. After the industrial revolution, the creation of waste becomes a real problem of sanitation and incineration become a practical solution for reducing waste volumes. Along the last decades, waste to energy (WtE) plants have become the preferred technology in the western European states for treating municipal solid waste (MSW). The ashes generated in these processes concentrate metals, including those considered hazardous. With an annual production of 20 million tonnes - increasing every year - reusing these ashes is now one of the main concerns. Several EU states created guidelines for reusing incineration bottom ash (IBA), which represent 90% of the WtE residues. These guidelines include a series of standards related to the content and leaching of heavy metals, and other hazardous components like dioxins, chlorides and sulphates. Even when most of the countries run the same standards, the limits imposed by each local legislation are not the same and thus no standard procedure can ensure a safe reuse of this waste material. Treating IBA mechanically cannot ensure full value recovery. After the mechanical treatment, 30% of the metals remains in the mineral residue, which excludes the possibility of recycling this material as aggregates for construction applications. High-temperature treatments can be used to extract more metals while it also transforms heterogeneous residues into homogenous and chemically stable mineral by-products that can satisfy the strictest standards for reusing them as raw materials.

The use of Submerged arc furnace (SAF) technology is assesses for conditioning IBA into a chemically stable raw material for the construction industry. Sub-objectives are to:

In the framework of the EU 2020 NEW-MINE project, several types of artificial mineral materials were developed treating incineration ashes from fresh (from municipal incineration plants) and old MSW (from landfilled waste) using SAF technology. MSW incineration bottom ash (IBA) and fly ash (IFA) were provided by the company AVR in Netherland. On the other hand, landfilled waste was provided by WP1 (from NEW-MINE).
Before treating these wastes at high temperature, ashes were first dried, and later on, metallic pieces were recovered using magnetic and eddy-current separation. SAF conditions were defined through the study of the material and the thermodynamic conditions necessary for reducing metal oxides and for eliminating hazardous components such as chlorides, sulphates, dioxins and heavy metals. Metals were recovered either by liquid metal collection after coagulation or by volatilisation via the gas/flue dust output. The by-products produced in melting trials were comminuted and characterised. Physical properties of IBA and resulting slags i.e. viscosity, density, melting point, chemical and mineralogical composition were modelled using FactSage, Origin and Minitab. The influence of slag additives like CaO or MgO were also studied. Furthermore, the influence of the additives on conversion kinetics were tested in lab-scale experiments. Metal, slags, and gas emissions produced during smelting were characterized through WDXRD, XRF, ICP, Ion chromatography, C/S analysis, DSC/TG calorimetry, FTIR, QEMSCAN and electron/optical microscopy.

Finally, different mineral precursors were upcycled into glass-ceramics in Pavoda by ESR 12, and as inorganic polymers in KU Leuven. Waste input materials, mineral by-products and their upcycled output materials were tested in terms of chemical stability by means of leaching tests, based on the standard EN 12457-4.

IBA is a heterogeneous waste that contains a wide range of minerals, unburnt organics and metals. Because the chemical composition also varies in function of the particle size, characterisation becomes a problematic task (Figure 23).

IBA contains valuable metals that can easily be recovered by mechanical techniques such as magnetic and eddy-current separators. Nevertheless, metals of small sizes remain trapped in the mineral phase and cannot be efficiently separated. Combining the information obtained from the smelting and the mechanical assessment (Figure 24), it can be concluded that no more than 30-40% of nonferrous metals and 90% of magnetics are recovered from IBA.

After mechanical treatment, the bottom ash was reprocessed using SAF technology to produce a clean mineral by-product and a metal phase rich in iron and copper besides other metals such as Ni, Cr, Co, V, Ag (Figure 25).

In order to improve the properties of the mineral phase, several fluxes such as CaO or MgO besides other mineral wastes, e.g. bauxite residues, BOF slags or MSW incineration fly ash (IFA) were added during the smelting process (Figure 26).

Several mineral by-products were upcycled by ESR 12 for the production of glass-ceramic foam. During the secondment in KU Leuven, also many of them were tested as precursors for inorganic polymers (Figure 27). 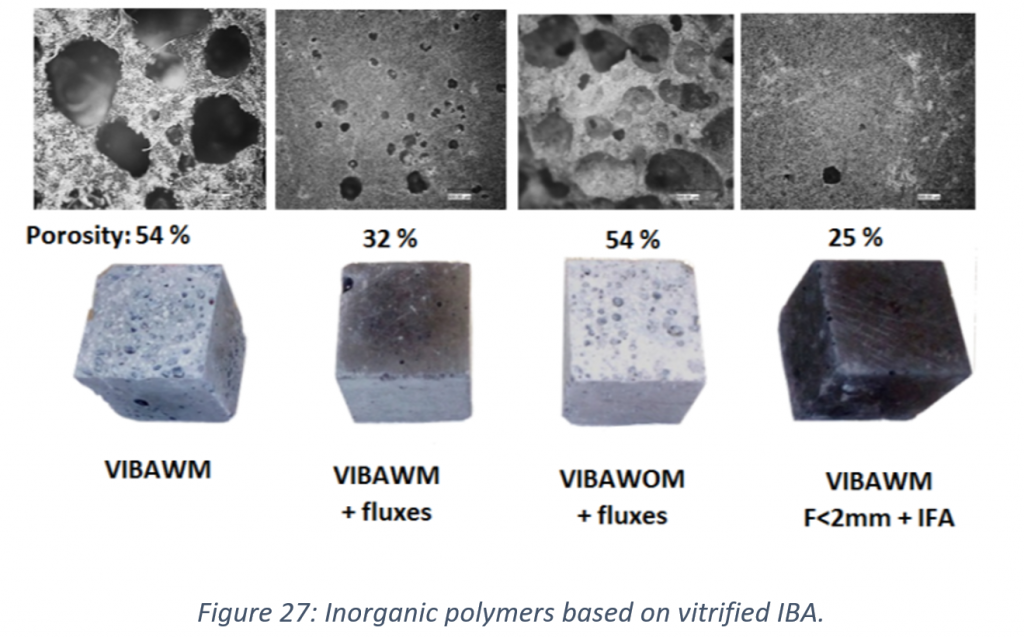 These experiments demonstrated that WtE ashes could be successfully upcycled into dense or porous construction materials such as bricks, tiles and acoustic and thermal insulation panels.

One of the most critical aspects of recycling waste is fulfilling legal requirements. Incineration concentrates pollutants in the mineral phase, and thus several of the ashes produced in WtE plants are considered hazardous and cannot be recycled. Vitrification demonstrated to be a robust technique for treating and conditioning mineral waste. Nevertheless, the slags produced not always fulfilled the most strict legislation (E.G the Austrian legislation) and thus more studies are still needed in this area.

Physical properties such as melting point, viscosity, density, liquid fraction, etc. were modelled. The use of fluxes reduced three times the proportion of metal drops trapped in the mineral phases after smelting enhancing their chemical stability. Nevertheless, proper measurements still need to be carried out to reduce the heavy metal leaching. This is planned for the final year of this research.