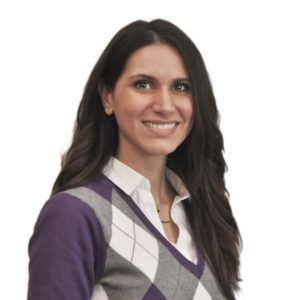 The objective of my research is the transformation of the municipal solid waste incinerator bottom ash (MSWI BA) into a valuable product, an inorganic polymer, which can be used as a building material. The first step for this is the thermal treatment of the MSWI BA in a microwave furnace and the subsequent quenching, so a highly amorphous material is obtained. The activation of this material with an alkali solution will be the final step for the synthesis of inorganic polymers. In addition, a thermodynamic model will be formed, allowing the selection of the most promising additives and thermal treatments based on the composition of the specific incoming residue, as well as to predict the outcome of the slag.

Global population growth along with the ever-increasing standard of living, results in resource depletion and the generation of large amounts of municipal solid waste. The social, environmental and health impacts associated with the disposal of waste in landfills have prompted the European Commission to implement solid waste prevention and management policies. The Waste Framework Directive relies on a waste hierarchy that includes in order of priority: prevention, preparation for use, recycling, other recovery (e.g. energy recovery achievable by the incineration of waste) and disposal. The major types of waste subjected to incineration are municipal solid waste, non-hazardous industrial, hazardous, and medical waste, as well as sewage sludges. Through the incineration process heat is generated, recovered and converted into energy. Simultaneously, the process itself contributes to the breakdown of pollutants and waste volume reduction. Incineration leads also to the generation of BA. Currently, BA is used as embankment filler, landfill structure material, road subbase material and aggregate in concrete. A straightforward alternative approach in terms of circular economy is the direct utilization of BA in building materials. The presence of heavy metals in BA, however, is considered to be one of the main hindrances to its direct use. Acknowledging that, a significant amount of research has been undertaken related to beneficiation techniques for the use of BA as raw material for different applications. Among the metal extraction techniques, washing and ageing are already implemented at industrial scale, whereas vitrification has drawn research attention and emerges as the most effective technique for high immobilization efficiency of heavy metals. Nevertheless, vitrification entails a high temperature operation and is considered a non-economical route because of the high energy consumption. In response to this, a novel and potentially green technology, which has demonstrated advantages over conventional heating methods, is microwave heating. The ability of microwaves to heat selectively, and quite often volumetrically, depending on the microwave process equipment, results in high heating rates and energy savings. These essential features favour its selection in many processes, such as waste treatment and vitrification. Up to now, microwave vitrification has only been applied to nuclear waste.

Initially, the microwave response of MSWI BA was evaluated through the measurements of dielectric properties. As a second step, the microwave vitrification of BA was realized using a single-mode microwave cavity, operating at 2.45 GHz. Combining the experimental results with the simulation results, using COMSOL multiphysics, the underlying heating mechanisms were revealed. After 6 min processing time and 800 W applied power, an almost fully vitrified product was obtained. This was used as a precursor for the synthesis of porous glass-ceramics and porous inorganic polymers, favoured by the inherent metallic aluminium content of BA.

The response of MSWI BA to 2.45 GHz microwave irradiation was assessed through dielectric properties measurements up to 1060°C (Figure 26). BA is a low loss microwave absorber up to 320°C, above which the dielectric properties are dominated by the pyrolysis of organic matter and the production of char resulting in an instantaneous thermal runaway of 500°C/min. The identified phase changes in the BA during microwave processing were the formation of pyroxene group minerals, liquid phases and the gradual transformation of hematite to magnetite, wüstite and metallic iron. 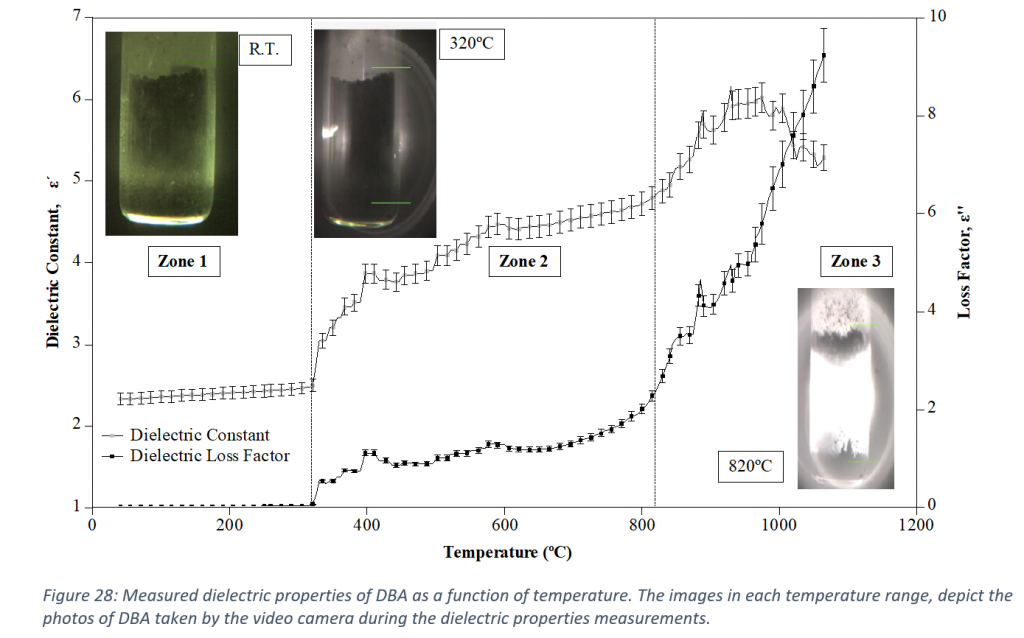 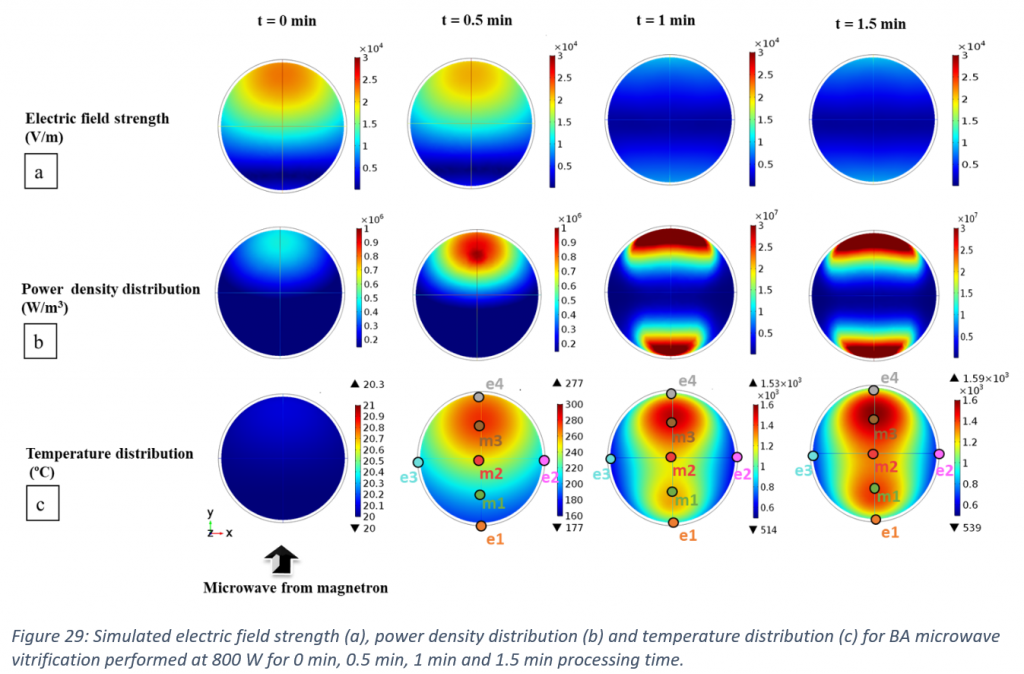 The slight increase of the dielectric properties at room temperature (Figure 29 c, t=0 min) namely the low microwave energy absorption from BA, attenuates the electric field strength, demonstrated by the decrease of its value (from 1.6x105 V/m to 2.4x104 V/m). Similarly, as the power density is proportional to the square of the field strength and to the material’s loss factor, it appears to obtain a moderate value equal to 0.5x106 W/m3 to the edge of BA. Within 0.5 min the highest achieved temperature is found to be equal to almost 300 ˚C , at the position where the field strength and power density create a hotspot. This is potentially explained by the substantial effect of field strength on BA absorption power and temperature distribution, unlike the negligible influence of BA dielectric properties that still at that temperature hardly affect the microwave process. This behaviour complies with the slow evolution of the experimentally measured dielectric properties of BA up to 320 ˚C. Beyond 0.5 min (30 s) crucial changes govern the evolution of the temperature and power density. As previously reported char production around 320 ˚C promotes the generation of the localized hotspots, due to the microplasmas. These points could be denoted by m1 and m3 along the y axis of Figure 29c, t=1 min, in which the temperature instantly achieves thousands degrees (1530 ˚C and 1200 ˚C respectively, inducing the onset of melting. Based on Factsage calculations, the melting temperature of BA is defined between 1200 ˚C and 1250 ˚C. Although the internal temperature of BA is higher than its edges (Figure 29c, t=1 min, points e3 and e2), creating thus the so-called ‘inverse’ temperature gradients the sample is heated volumetrically, confirmed by the thermal runaway all the points (Figure 29c) exhibit when t=1 min (Figure 29b) and by the even distribution of the power density within the sample (Figure 29b, t=1 min). A value of power density equal to 2-3x107 V/m is sufficient to induce flash BA melting (in the order of some seconds). Further increase in treatment time (t=1.5 min) does not contribute to a significant rise of the temperature in BA sample, as the highest achieved is 1590 ˚C (Figure 29c, t=1.5 min, e4 point). Unlike, the effect of volumetric heating is more evident as minor temperature gradients appear along the y and x axis in Figure 29c. Validity of the existence of molten phase in BA beyond 1 and 1.5 min that the simulation results suggest, comes from the experiment performed at 800 W power input for 1.5 min, delivering 4 wt % VBA yield. According to Fig. Figure 30b, BA microwave processing for more than 1.5 min will not contribute to a fully molten BA product, as beyond 1.5 min thermal equilibrium is achieved in the system, implying in theoretical/simulation terms the equal amount of absorbed energy by BA and its loss in the surrounding environment. This is translated as loss of energy because of the cold environment of cavity and the lack of insulation material around the quartz tube, being in line with the experimentally found saturation point in VBA yield at 86 wt%. The inherent quenching (fast cooling) occurring in the microwave cavities, without using an insulation material facilitates the aim of vitrification, avoiding the use of conventional quenching means, that include the use of water or air.

The vitrified product was therefore used for the manufacture of porous glass ceramics (University of Padova, Italy). The obtained materials had up to 70 vol% porosity and 3 MPa compressive strength. The formation of highly porous bodies relied on intensive mechanical stirring of VBA powder in a weak alkaline medium, with the addition of a surfactant, followed by sinter-crystallization at moderate temperatures (800 °C or 900 °C). Although sinter-crystallization did not lead to the stabilization of all heavy metals in the nearly completely amorphous VBA, the leaching values for all porous materials were below the EU thresholds specifications. The highest strength-to-density ratio was found for the porous 1M/SLG/900, in which the valorization of VBA was coupled with the reuse of 10 wt% SLG waste, in a 1M NaOH alkalinity medium. The final products can be used as insulation materials or in electro-catalytic reactions, due to their high relative permittivity values. Apart from the production of porous glass-ceramics, the vitrified BA was also used as a precursor for the porous inorganic polymers. Mixing the precursor with a sodium silicate solution of high alkalinity, avoiding the use of any thermal treatment, as sintering, resulted in the formation of high porous materials with up to 4.8 MPa compressive strength. The inherent aluminium content of BA led to the avoidance of the use of any gas releasing agent that is typically used in the case of porous inorganic polymers, as aluminium powder.

Aiming to realize microwave vitrification of the MSWI BA, as a potentially economic and environmental favourable process, the response of the BA when subjected to the electromagnetic field was assessed through the dielectric properties measurements. Further, flash vitrification was successfully realized for BA using a single-mode microwave cavity. The microwave vitrified product was used as a precursor for the synthesis of porous glass ceramics and porous inorganic polymers. Porous glass ceramics exhibited satisfying physical and mechanical properties while setting at the same time the baseline to be used for electro-catalytic reactions. The porous inorganic polymers showed a very promising combination among density, porosity and compressive strength to be used as building insulation materials. Further work on life cycle assessment of the two final products, namely the porous glass ceramics and porous inorganic polymers along with a techno-economic assessment of the vitrification process of BA could be very critical for a potential scale up of the process.