Out of sight, out of mind: The unsustainable production of waste

As the good citizens we are, every week when our waste baskets are full, we take out the trash and empty them into those large municipal waste bins, expecting that all that garbage magically disappears from our sight the next day. In a few days we will repeat the same action of throwing away our waste without any bad feelings, because we know for sure that we are paying taxes to our community, so they can take care of this “little” problem called waste management. 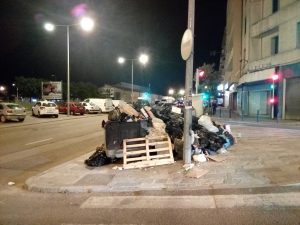 Fig. 1: Municipal solid waste accumulated on the pavement after 5 days of striking waste collector workers. Ajaccio, Corsica in May 2018 (France).

It only takes a single strike of our dear friends, the waste collectors, to notice how in a matter of days our town gets full of residues to the point that life becomes almost unbearable. See Fig. 1.

But where does all this waste go?

This question, dear reader, is simple and complicated at the same time. First, even if we do not see our waste because someone picks it up, it does not mean that it disappears. Today, we try very hard to valorise our waste and that is why several countries have adopted source separation by type of waste as the very first step. This has helped countries, such as Germany, Belgium and the Netherlands, to reduce the amount of waste disposed of to a great extent. However, the problem is yet far from being solved.
Unfortunately, much of what we deposit in our containers for recyclables is not recycled. And although many municipalities have begun to apply legal provisions for waste selection and recycling, the reality is that, in many cases, these provisions are more focused on generating changes in attitude and behaviour in citizens than on recycling itself. Much of our waste or all of it, including recyclables, ends up, in the best case, in incineration plants or, in the worst case, in landfills. 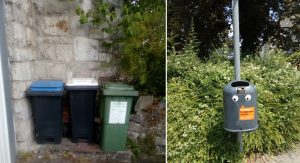 So… what do the ‘most advanced’ waste management societies do so differently from others?

The most rigorous countries in terms of waste management, such as Germany, use several containers and schedules for the waste collection (source separation as shown in see Fig 2 – left). A green waste bin for organic waste, whose destination is either fermentation (for the production of biogas) or composting plants. A blue waste bin, where paper and cardboard are to be deposited in order to reuse the cellulose (for the recycling of paper). And a black, red or white waste bin, in which one can throw away everything that cannot be recycled. Of course, there are also communal glass containers for the disposal of our bottles and jars. So, we suppose that our nicely separated waste gets recycled, right?

Well… now let me tell you another story. The history of municipal solid waste after being collected.

In plastics, if you are a good observer, you will notice that on the back of most bottles and containers there is a symbol indicating that they are recyclable and, therefore, you should throw them in a certain waste bin or bag that your community so kindly provides you . Today, there are hundreds of plastics that are used commercially to contain our goods, these are mostly recyclable. However, given their wide variety, their recyclability, from a practical point of view, is inapplicable. We mostly recycle soda bottles and other products, such as yoghurt, detergents, oils, etc., from which we know the material. But what happens with the rest? It’s just waste. This could be improved, for example, if we legally limit the number of plastics for our common use to a few of them. This would be technically possible but there must be a social and political commitment first.

Organic waste, in most of cases, is only dumped or burned. Numerous communities have started to produce biogas and then compost. This is excellent news and even though no one will become rich doing so, we are lowering costs, creating genuine jobs and, of course the most important thing, we are greatly reducing negative environmental impacts. This is something that you should definitely encourage your politicians to take up, if this would not yet implemented in your town.

The rest of our garbage, along with everything collected from the small municipal bins (Fig.2 – right) that are placed on each street, will go to, in the best case, a municipal incinerator or, in the worst case, to a landfill.

For many experts an incinerator is an excellent technology to deal with municipal solid waste, for others, it is a polluting facility that generates large amounts of greenhouse gases. The reality is that this technology has both bad and good sides. Municipal incinerators, also commonly known as Waste-to-Energy plants, allow reducing by about 90% the volume of waste (around 70% by weight), transforming part of the calorific value in electrical power. In winter some plants also use the rest of the waste thermal energy to heat houses. 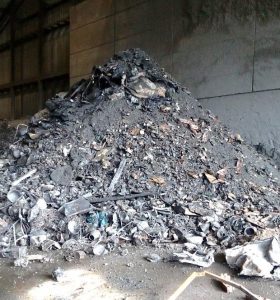 Incineration plants do not operate free of waste neither. At the end of the process besides large amounts of CO and CO2, two types of wastes are produced, which are called ashes. These ashes are: “bottom ash” which is called like this because it is recovered at the bottom of the incinerator (see Fig. 3) and “fly ash”, called so because it is transported by the combustion gases and recovered from the gas cleaning process of such a plant. The bottom ash can contain several metals, such as aluminium, copper and iron, that can and are mostly recovered by mechanical separation. In addition, these ashes are mainly composed by a mixture of oxides, carbonates and, to a lesser extent, by sulphates and phosphates. Small European nations with space issues, reuse a part of these ashes as aggregates for road-paving or concrete instead of burring them in a landfill, due to the high cost of land.

This is good news! Well… as the saying goes: Not all that glitters is gold.

The fine material in bottom ash can contain heavy metals, such as copper, zinc and lead, which are toxic and reusing them without extracting these elements is somewhat risky. What happens now with the fly ash? It is mainly deposited in landfills because it contains high concentrations of zinc and lead, but also trace amounts of mercury and cadmium. Here, we may encounter serious health and environmental problems due to their fine granulometry, since wind can carry it for several kilometres contaminating everything along its path.

You realize now that your waste does not disappear. It can be diminished and part of it can be recycled, but we still keep burying it in landfills. And, unfortunately, the story does not end here. Only in Europe it has been estimated that there are around 500.000 landfill sites and, many of them, belong to the so called “non-sanitary” because the gas emissions and leachates are neither controlled nor monitored. This means that these sites are polluting the air through the emission of methane, carbon dioxide, sulphides, among other gases; and polluting our aquifers by the leaching of organic compounds and heavy metals, etc. Besides, I do not need to tell you that for certain plagues of birds, rodents and insects these places are paradise.

But, why do we still bury everything in landfills?

Simply put… because it is too expensive for our government to take care of this problem. The reality is that, unconsciously, we have a lot of faith in future generations. This faith is so strong that our politicians prefer to spend our taxes on other “more” urgent issues and leave those problems to our children and grandchildren.

The time has come and now we are the children or grandchildren for which the past generations decided to leave the problem. It’s not fair to have to solve somebody else’s problems, but we cannot leave the problem for the next generation because our planet is basically on the verge of an environmental catastrophe.

There is still hope…

The NEW-MINE project is stimulating the adoption of the Enhanced Landfill Mining (ELFM) practice in Europe. NEW-MINE is a transdisciplinary research team working in all aspects of landfill mining, in terms of both technological innovation and multi-criteria assessments. The project follows a value-chain approach, from advanced landfill exploration, mechanical processing, plasma thermochemical conversion and upcycling, while the multi-criteria assessment methods allow comparing combined resource-recovery & remediation ELFM methods with the classic remediation. The ‘enhanced’ landfill mining approach basically means that we aim to clean up the old landfills, recycle materials that can be recycled, and valorize the parts so that they can be reused in different applications.