New Policy Brief on the Social License to Operate 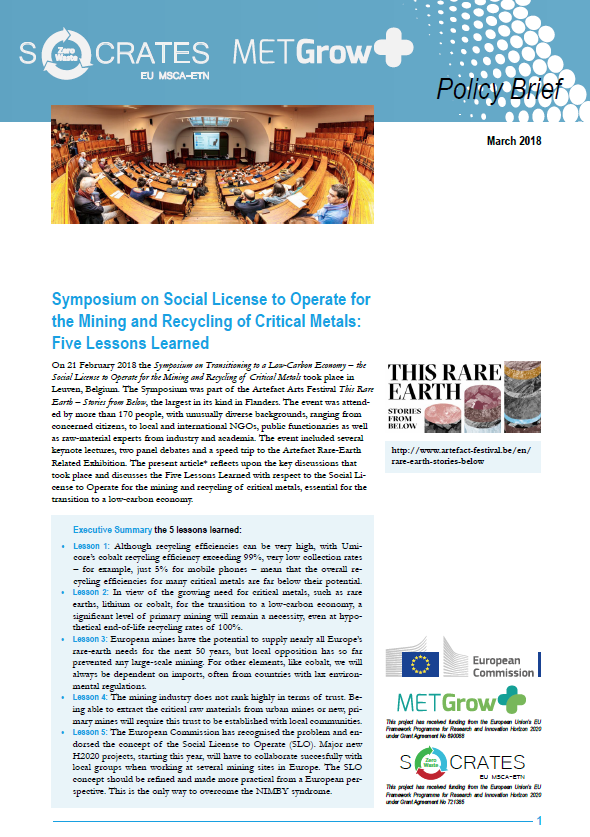 Lesson 2: In view of the growing need for critical metals, such as rare earths, lithium or cobalt, for the transition to a low-carbon economy, a significant level of primary mining will remain a necessity, even at hypothetical end-of-life recycling rates of 100%.

Lesson 3: European mines have the potential to supply nearly all Europe’s rare-earth needs for the next 50 years, but local opposition has so far prevented any large-scale mining. For other elements, like cobalt, we will always be dependent on imports, often from countries with lax environmental regulations.

Lesson 4: The mining industry does not rank highly in terms of trust. Being able to extract the critical raw materials from urban mines or new, primary mines will require this trust to be established with local communities.

Lesson 5: The European Commission has recognised the problem and endorsed the concept of the Social License to Operate (SLO). Major new H2020 projects, starting this year, will have to collaborate succesfully with local groups when working at several mining sites in Europe. The SLO concept should be refined and made more practical from a European perspective. This is the only way to overcome the NIMBY syndrome.

Disclaimer: the views expressed in this article are the private views of the author and may not, under any circumstances, be interpreted as stating an official position of any of the organisers of the Artefact Symposium: Stuk, SIM² KU Leuven, KU Leuven Dienst Cultuur, EIT Raw Materials, i-Cleantech Vlaanderen, EU METGROW+, Leuven 2030, Province of Flemish Brabant, nor of ETN SOCRATES.