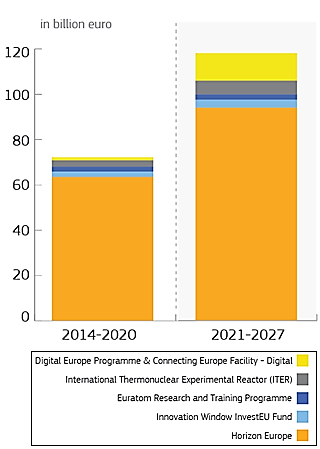 The new European Research and Innovation Program will be implemented through three pillars designated as i) Global challenges and industrial Competitiveness, ii) open science and iii) open innovation. Roughly half of the program funds (52.7 billion euros) will be allocated to respond to Global challenges and industrial Competitiveness namely by supporting research in areas such as health; security and social inclusion; climate, energy and mobility; and food and natural resources. In its communicate, the Commission give examples of research topics that can be funded through this budget as “ the fight against cancer, to clean transport or plastic-free oceans”.

The reinforcement of communitary funds dedicated to support market-creating R&D can be seen as a natural consequence of the already declared necessity to nurture a favorable landscape for R&D intensive business and increase public investment in R&D and other intangible assets as stated by the Commission in the 2018 Research and Innovation performance in the EU-SRIP report.

Notwithstanding the general consensus around the structure of the proposal, the scientific community seems to agree that the Horizon Europe “falls short”. Some economic experts point out that counting the estimated inflation over the timeframe of the program the increase of the EU funds for R&D will be only 10 billion euros regarding the former program.

An online petition was already launched to urge the European Parliament, the Council of Ministers and the European Commission to raise the bar and make a “budgetary commitment for Research and Innovation” by raising the next 7-year Financial Framework budget to 160 billion euros. The petition alerts to the fierce competition in terms of R&D global leadership where economic powers such as Korea, Japan, China and USA current gross domestic spending on R&D in percentage of GDP is higher than in the EU.

The negotiation of the European R&D Program will still be long and is expected be harsh with member states trying to reduce national contributions as previously happened during the Horizont 2020 approval. The commission proposal is a important sign and a clear recognition of former funded research merit, reaffirming scientific excellence and innovation as fundamental for long-term social and economic growth. Recognizing it is insufficient but such fact cannot be undervalued in a time where obscurantism and science denial rise in western societies. Now more than ever its time to we as Europeans take action and “put the our money where our mouth is”, demonstrating the we are willing to continue to play a role as global leaders in scientific and social progress.

As is stated in the mentioned petition “Europe can, and Europe must take the lead! Member States must enable the EU to make this possible!”

This publication reflects the views of the author, and the institutions involved in the  EU Training  Network for Resource Recovery Through Enhanced Landfill Mining cannot be held responsible for any of the information contained therein.