Preceding the formal kick-off meeting of the EU MSCA-ETN NEW-MINE project on Enhanced Landfill Mining, a unique event “New-miners meet locals” was organised on February 6, 2017 in Houthalen, Belgium. The event took place to initiate a fruitful dialogue between the NEW-MINE ESRs/Supervisors from diverse EU universities and companies and the so-called ‘DE Locals’ group of the Remo landfill site in Houthalen, Belgium.

The video documentary on this event is now available and can be viewed here.

“The locals” is a civil society group, whose members live in the vicinity of the flagship Remo landfill site, has been actively following up the Closing the Circle ELFM project of Remo Milieubeheer (Group 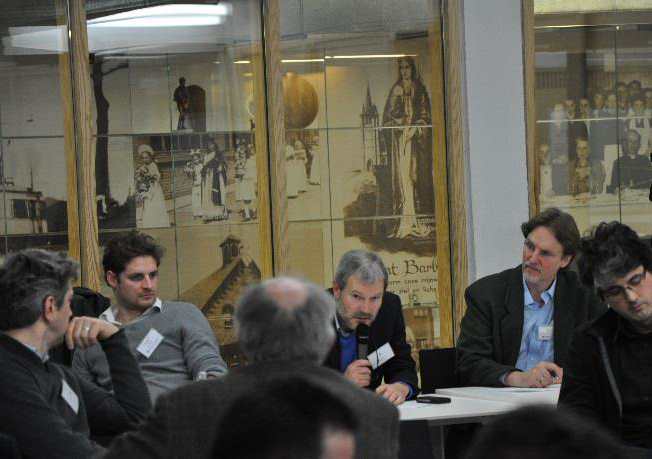 Machiels) for more than 6 years (involving 39 locals meetings). They offer a unique perspective on the view of local communities on ELFM projects. The NEW-MINE locals event was organised to develop a common understanding between the research community on the one hand and local inhabitants that live in the direct vicinity of landfill sites on the other hand.

With a participation of more than 50 people the event was a major success [Download Report “NEW-MINERS meet locals” here]. A plenary session, in which the Closing the Circle case (Yves Tielemans) was discussed along with the perspectives of ‘DE LOCALS” (Maurice Ballard) and the NEW-MINE multi-criteria research approach (Joakim Krook) (see slides below), was followed by multiple breakout sessions. Each group consisted of on average five members, with at least one representative of ‘De Locals’, one or two ESRs, one or two (co- )supervisors, and one or two members of EURELCO or representatives of the NEW-MINE partner organisations. A series of guiding questions was elaborated by the ‘De Locals’ group to stimulate the discussion. The event led to a series of commitments from the NEW-MINE team with respect to the future involvement of the locals in the ETN NEW-MINE project.

A detailed overview of the questions and the outcomes of this first NEW-MINE locals event can be found in the official report, which is made public, to prove that NEW-MINE foresees full transparency towards the local communities, concerning the results that are generated in this 4-year EU-funded research project.