“When kids look up to great scientists the way they do to great musicians and actors, civilization will jump to the next level.” said the eminent theoretical physicist Brian Greene. But do we really need to reach that “next level” of civilization? It seems that if we want to preserve life, the answer is yes. If we look at the long-term complications, let’s say in around five billions years, when our sun will inflate to become a red giant and earth will become uninhabitable, the merger of the two different theories on which modern physics relies (quantum mechanics and general relativity) into the so-called “theory of everything” will be the key discovery for our descendants to move to another earth-like planet [1].

Of more current concern are the serious consequences of global warming which we, as mankind, will undoubtedly survive but this is already not being the case for several others living species. The effects of climate change are now globally disrupting ecosystems as well as fundamental activities of human societies. Although our planet’s flora has been helping in counteracting the anthropogenic emissions – plants have increased their growth rate due to higher atmospheric CO2 levels and reduced their CO2 re-emission from respiration due to the warmer temperatures – it can no longer sustain the burden of our fossil fuel-based civilization.

The absolute level of CO2 in the atmosphere is continuing to rise, after breaking the record of 400 parts per million (ppm) in 2015. To date, the level of carbon dioxide in the atmosphere is already high enough to cause a medium-term period of global warming of more than 2°C above pre-industrial levels, which is the maximum limit set in the Paris Agreement [2]. For this reason, a significant reduction in emissions has to be combined with the physical removal of CO2 from the atmosphere powered by renewable energy.

Climeworks, a spin-off from the Professorship of Renewable Energy Carries (PREC) group at ETH Zurich (Switzerland), is pioneering this field of carbon capturing. Using Iceland’s abundant geothermal energy as a renewable source, they are capturing CO₂ from the air and injecting it underground where it turns into stone due to the characteristics of the soil and the pressure [3]. Scientists at PREC are also developing another eco-friendly way to utilize the air-captured carbon dioxide that is converted, along with water and concentrated solar energy, into synthetic hydrocarbons that can replace fossil fuels [4].

We urge to speed up and scale up the strategies of correction suggested by the scientific community, and we need to do it now. Jem Bendell, Professor in sustainability management at the University of Cumbria (UK), has recently warned that an environmental catastrophe – which generates increased levels of malnutrition, disease, migration, civil and international conflict – is already inevitable in the near-term future (within the next 10 years) [5]. The expert asserts that it is too late to design and employ mild adaptation measures that consider the impact of climate change on our society as still manageable. Instead, he proposes the implementation of a “deep adaptation” approach, in which a social collapse can no longer be considered preventable and then three actions have to be encouraged: “resilience” to endure the changes, “relinquishment” of wrong habits and “restoration” of low-impact ways of life.

Although everyone agrees that a change in the trend is needed (besides a small number of climate change deniers, sometimes also very powerful [6]) and the actions to be taken are clear, why is it that among the 195 signatory nations of the Paris Agreement in 2015, currently only Gambia and Morocco have conformed their emissions to stay below the agreed limit of 1.5°C? [7] The root cause of the failure can be attributed to the voluntary nature of the Paris Agreement, which implies that the achievement of the agreed targets does not have to be demonstrated. Under such circumstances, political unwillingness, buck-passing and incapacity, in addition to conflicting economic interests and ongoing scientific uncertainties, generate unrestrained time lags that hinder the creation and the realization of climate change mitigation policies. 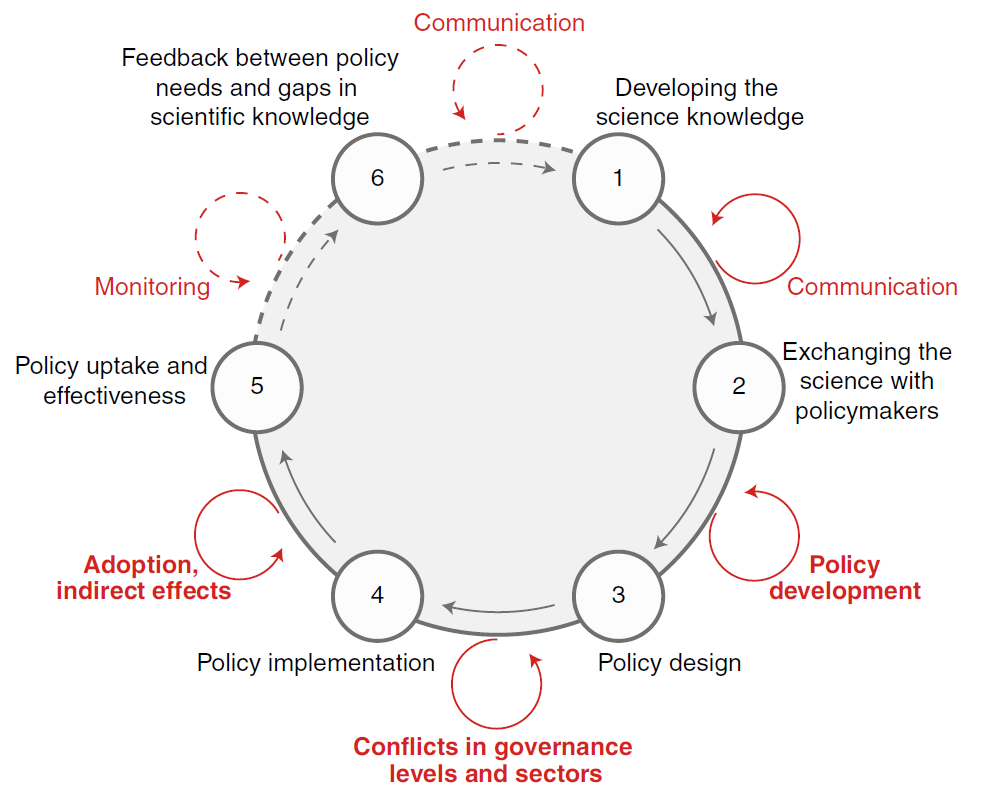 Figure 1. The science-policy exchange cycle and associated time lags. Science-based policy-making is a cyclical process that involves potential time lags (red) at each step that may also reduce the ultimate impact of the policies. Although a cyclical relationship is shown, each lag can occur independently of any other and may prevent further progression. Monitoring of policy impacts and feedbacks to new scientific research (dashed lines) are particularly uncertain processes that might not only involve time lags, but might also effectively not take place. Extracted from reference [8].

In order to curb the acknowledged inefficiencies within the complex science-based policy-making process (see Figure 1) that are jeopardizing the achievement of the Paris Agreement’s goals, the takeover of international climate policy on the economic system is being advocated. However, the enforcement of top-down environmental laws that do not take into account existing policies and economic drivers risk to produce only temporary benefits and even create damage on other sectors. Given the unlikelihood of decoupling climate justice from economic drivers, discussions on a new economic system centered on human and ecological well-being have to be promoted. An emerging example is the “post-growth” movement, that has recently proposed to the European Union (in a document signed by 238 academics) measures such as the introduction of alternative macroeconomic indicators to the GDP that can also consider the impact on human well-being and resource use, or the establishment of a ministry for economic transition in each member state [9].

Currently, fighting against the climate change is free will and for this reason we urge leaders who can promote and initiate political actions. An inspiring example is the young and charismatic activist Greta Thunberg, whose commitment contributed to raise awareness of the consequences of climate change and galvanized hundreds of thousands of people all over the world [10]. The story of this girl, who had the bravery to call the world’s leaders out on their responsibilities, is a wake-up call for the activist who is quiescent in us.

More engaged citizens (possibly grown-ups) are needed to push the policy-makers towards action. Every one of us can make a difference and if we try all together, there will be a chance to save our house from the fire. In conclusion (to look on the bright side), an adverse event such as the climate crisis resulted in the appearance of leading lights like Greta, who are offering a glimpse of what the “next level” of civilization is: a world in which the preservation of life and nature has priority over anything else. 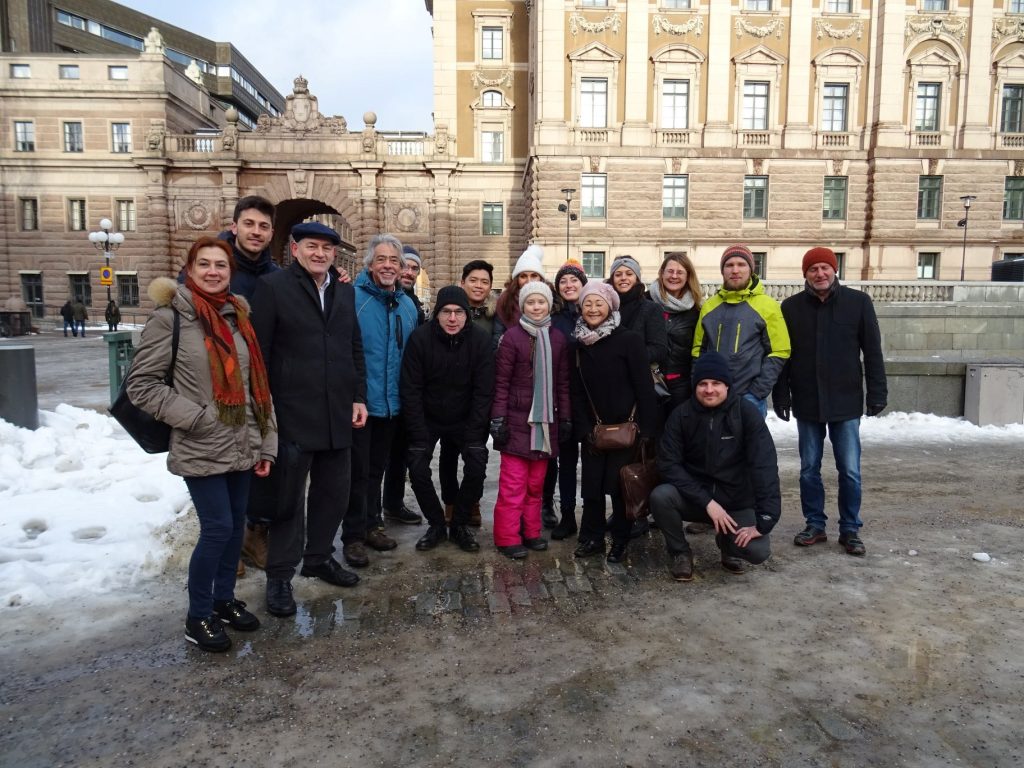 Figure 2. The NEW-MINE team meets Greta Thunberg. On the occasion of a network-wide meeting in Stockholm (February 8, 2019), the NEW-MINE team expressed its support to the actions of the brave 16-year-old girl during her demonstration in front of the Swedish Parliament.